Arnaldo Pomodoro was born in Montefeltro in 1926, he spent his childhood and education in Pesaro. He lives and works in Milan since 1954.
His works from the 1950s are high-reliefs where a unique and previously unknown sculptural “writing” emerged, variously interpreted by the most important critics. In the early 1960s he turned to three-dimensional work and focused his research into the solid geometric form: spheres, discs, pyramids, cones, columns, cubes – all in burnished bronze – are lacerated, corroded, excavated in their depths, with the intention of destroying their perfection and discovering the mystery closed within. The formal juxtaposition between the shiny perfection of their geometric shape and the chaotic complexity of their insides from now on becomes a constant in Pomodoro’s production.
In 1966, he was commissioned to make a sphere, three and a half metres in diameter, for the Expo in Montreal. Now in front of the Farnesina in Rome, it marks his shift towards monumental sculpture. This was the first of several works by the artist placed in symbolically important public spaces: in many city squares (Milan, Copenhagen, Brisbane, Los Angeles, Darmstadt), in front of Trinity College, Dublin, Mills College in California, the Cortile della Pigna in the Vatican, opposite the United Nations in New York, at the Paris headquarters of UNESCO, in the PepsiCo sculpture gardens in Purchase, and in those of the Storm King Art Center in Mountainville, just outside New York City.
He has made many environmental works, ranging from the Project for the New Cemetery of Urbino of 1973, excavated into a hill in Urbino, which was, however, never built, due to local issues and disagreements, and Moto terreno solare, a long concrete wall for Il Simposio di Minoa in Marsala, through to the Sala d'Armi for the Poldi Pezzoli Museum in Milan, Entering the Labyrinth, dedicated to the epic of Gilgamesh, which he completed in 2011, and Carapace, a wine cellar in Bevagna made for the Lunelli family.
Memorable retrospectives have consolidated his reputation as one of the most significant contemporary artists. His traveling exhibitions have toured throughout Europe, America, Australia and Japan.
He has dedicated himself to set design since the start of his activities and created “spectacular machines” for numerous theatrical works, from Greek tragedy to melodrama, from contemporary theatre to music.
He has taught in the art departments at various American universities: Stanford University, University of California at Berkeley, Mills College.
He has been the recipient of many prestigious awards: the Sculpture Prizes at the Biennials of São Paulo (1963) and Venice (1964); the Japan Art Association's 1990 Imperial Praemium for Sculpture, and the Lifetime Achievement in Contemporary Sculpture Award from San Francisco’s International Sculpture Center (2008). In 1992 he received a degree in the humanities honoris causa from Trinity College Dublin, and in 2001 an honorary degree in architectural engineering from the University of Ancona.

For further information on the artist’s life and activity and for any useful insight into his works, please refer to his online Catalogue Raisonné. 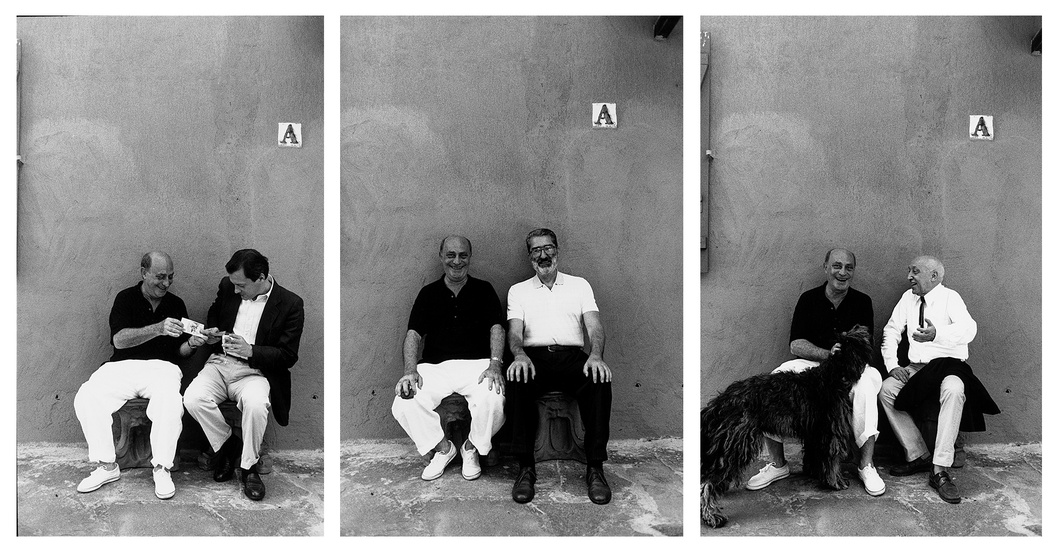 In the picture, from the left: Arnaldo Pomodoro with Pierluigi Cerri, Giorgio Marconi and Francesco Leonetti. Foto Carlo Orsi